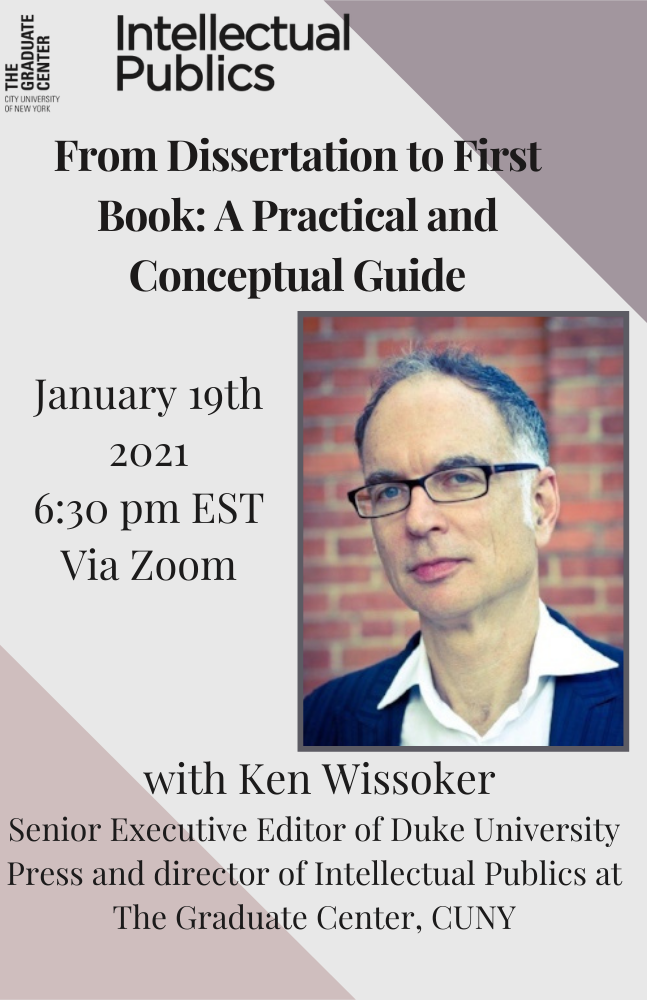 Ken Wissoker, Senior Executive Editor at Duke University Press and Director of the Intellectual Publics program at The Graduate Center, will discuss the process of turning a Ph.D. dissertation into a first book. He will share advice and expertise around the system of academic publishing with a focus on questions of genre and audience.

After registering, you will receive a confirmation email containing information about joining the webinar.

The talk is free and open to the public. All are welcome.

Ken Wissoker is the Senior Executive Editor of Duke University Press, acquiring books in anthropology, cultural studies and social theory; globalization and post-colonial theory; Asian, African, and American studies; music, film and television; race, gender and sexuality; science studies; and other areas in the humanities, social sciences, media, and the arts. He joined the Press as an Acquisitions Editor in 1991; became Editor-in-Chief in 1997; and was named Editorial Director in 2005. In addition to his duties at the Press, he serves as Director of Intellectual Publics at The Graduate Center, CUNY in New York City.

He has published over a thousand books which have won over 150 prizes. Among the authors whose books he has published are Stuart Hall, Donna Haraway, Achille Mbembe, Eve Kosofsky Sedgwick, Jack Halberstam, Charles Taylor, Lisa Lowe, Lauren Berlant, Brian Massumi, Arjun Appadurai, Sara Ahmed, Fred Moten, Chandra Mohanty, and Cherríe Moraga. He has written on publishing for The Chronicle of Higher Education and in Cinema Journal, and writes a column for the Japanese cultural studies journal “5.” He speaks regularly on publishing at universities in the US and around the world.

Wissoker is the author of the Cinema Journal essay “The Future of the Book as a Media Project” and the earlier Chronicle of Higher Education articles “Scholarly Monographs Are Flourishing, Not Dying” and “Negotiating a Passage between Disciplinary Borders” the latter of which was later reprinted with responses from five social scientists in the Social Science Research Council newsletter, Items and Issues. A three-part interview with him by Adeline Koh appeared in April 2013 on the Prof. Hacker blog.